We had a bit of a scare on Memorial Day.  After walking around Independence for about an hour, I decided to take a "quickdip" in the River over at Independence Park.  I was barely in the water, by the dock, when all of a sudden, I got caught by the current and was swept way out into the river!
There I was, almost in the middle, my little black head just peeping above the water.  I knew to ride it out...up ahead was a place I thought I can wrangle my way out of the current.  I looked "to shore" and saw my mom "yelling" to people who were docked, but still on the boat.  They said they were prepared to come out and help me.
All of a sudden, I got out of the current. Now I had to swim to shore, which was pretty far for an old guy like me.  Mom was on the sidelines, yelling "you can do it Kennedy"over and over and over...which spurred me on.  Finally I made it to shore.  Whew!
So...we went to McDonald's and got an ice cream cone to celebrate!
Thanks to those nice people in the boat who waited until I got to shore and were willing to help me!
Posted by Kennedy at 11:58 AM No comments:

Lowe's has become my favorite place to shop.  Yesterday, mom decided we needed some plants, and off we went to Lowe's.  We started in the outside nursery area.  I got into my "guide dog mode"and walked right next to her.  She then went to the check out counter....WHAT, I thought??  She is missing some things that we need at the house!!
I started pulling her the other way, into the main store.  "Kennedy, no" she said.  I gave her "the look"...gawds..she has been talking about the "portable hose" all week.  I remained steadfast.  Finally, she says.."Oh, Kennedy, you are so right...we do need to go into the main store"..so off we went, and I made her walk EVERY aisle to make sure she did not forget anything!!
Living with "old people"....I am exhausted.
Posted by Kennedy at 8:43 AM No comments:

KKB
Yes, those are my initials...Kennedy Kirby Buck.  I want to spend some time and let you know of my FIRST FAMILY, the Kirbys.  They were -- and still are -- wonderful to me.  As most of you know, I aspired to become a guide dog for the blind at an early age.  Megan Kirby, along with her mom, Linda, had me as their 4-H project.  Megan was my trainer, teacher, and best friend.  They taught me well.  Mike, the father, use to rub my ears at night and Adam, the son and brother, taught me to RUN..yes,  I did run in those early years.
Soon, when I learn to scan, I will post some pictures of me from my early days!  What a stud I was.  I even came to Salem a few times in those early days, not ever realizing I would end up here!
Mostly, I want to give kudos to my First Family...for raising me to be such a GREAT companion. A few years ago, I was able to spend a few nights with the Kirbys -- so many great remembrances...and they even come down to Salem and visit me.  So, thank you Kirbys!!  I think of you often and my mom and I talk about you all the time on our daily walks.
Posted by Kennedy at 1:13 PM No comments:

Good day for a swim 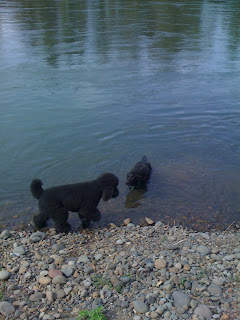 I have gotten sidetracked with all the activities going on (mainly babies) and forgot to mention my best friend and cousin Charlie!!  Here we are swimming one Sunday after church.  (I love the doughnuts at Church!)  Charlie doesn't swim, but that's okay with me.  I coaxed him into the water, to at least get his ankles wet, because that cools down your whole body.  More on Charlie and me later. Plus, I will add some of my other friends from Dog Park-- especially Solomon who I have been trying to teach how to swim for about 5 or 6 years now.
Posted by Kennedy at 12:38 PM No comments: 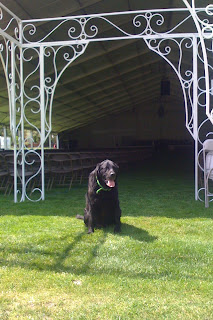 Here I am at Willamette University on Sunday.  About 3:00 p.m. I am at Aunt Patty & John's, I realize...I am suppose to be at WU getting my doctorate.  So, I left and started hitchhiking to Salem.  Then I heard everyone yelling in the neighborhood for me, so I thought I better get back to the Uffelman yard.
So, we finally made it down to Salem, in time for the doctorate degree... I was so thrilled to walk across the stage.
Posted by Kennedy at 9:05 AM 1 comment: 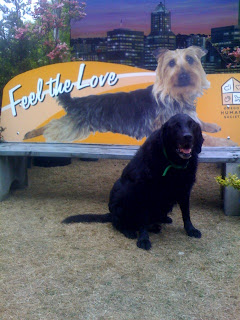 I "felt the love" this weekend!  Wedding, mothers' day, and all these places in Portland where people had not seen me for awhile (i.e the Nordstrom Pink Cookie window).   Here I am at the annual Doggie Dash in Portland, down at the waterfront.  Well, actually, I got there too late...(thankfully)...but there were lots of booths with free food, and all these dogs...greta dogs, cori dogs, & crazy maizies in all shapes & sizes.  Most had t-shirts on, and lots had their race "numbers" on.  So...everyone...I have an IDEA.  Next year, we will all enter together as the "Four Letter Clan"  (Loeb, Buck, Mack)...tied together and run this race and WIN!!
Posted by Kennedy at 8:39 AM No comments: 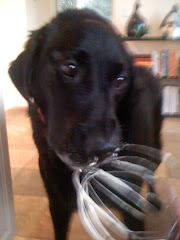